The history of the Japanese massage chair

Almost since the beginning of recorded time, the practice of using human touch or massage as a means of restoring health, well-being and balance has been practiced by mankind.

In fact, many claim that massage is one of the oldest forms of medical care. It predates almost all ancient medical practices and is thought to have originated in India before first being recorded in drawings in Egyptian tombs, which show people being massaged. It has also been recorded in China and is known to date back to about 2700 BCE.

The tradition of using hands as a medical therapy, was developed by Chinese traditional medical doctors as well as extensively used by Buddhists and Taoists who believe that touch is essential to their spiritual wellbeing and relaxation. Even today, they believe that massage can help restore health and well being or eudemonia to people. It is believed that is can prevent and assist with recovery from diseases by repairing the bodies meridians, energy will flow harmoniously throughout the body so as to allow the body to heal itself naturally.

Around 1000 BCE Japanese Monks, who were studying Buddhism in China appreciated the benefits of the healing methods promoted by traditional Chinese medicine and brought massage to Japan. The Japanese refined many methods of Chinese massage and developed name which then became shiatsu massage. The goal of shiatsu is to increase the bodies energy levels and unlock the body's “qi,” “ki,” or “chi” which will then assist in healing the persons mind-body-spirit using pressure in a holistic and non-invasive manner.

Both the ancient Greeks and Romans also used touch as a means of recovery and rejuvenation.

Fast forward to the 20th century, and as early as in WW1 massage was used in Europe to treat soldiers suffering from shell shock as well as exposure to nerve gas. While massage lost favour at various times throughout history, particularly in Western society, today it is extremely popular and an effective way to relieve stress as well as promote healing.

Massage per se is a popular treatment for addressing conditions such as back pain but many people cannot afford the money or time to find the right masseur to help them manage their ailment/s. Enter the massage chair - invented for the very purpose of empowering and accommodating most of us in the absence of an ideal & regular masseur.

Massage, whether hands-on or using a massage chair has plausible medical benefits. For instance, patients may get temporary pain reduction from any kind of stimulation of “muscle knots,” which are a likely factor in many common pain problems. This is due largely to the identification of trigger points which when freed can bring relief.

The health benefits of a massage chair are extensive. As well as to relieve back pain and assist in improving your range of movement, massage also can assist with lymphatic drainage, which helps the body’s natural defense systems; assist athletes both pre and post workouts and improve their performance; improve the condition and appearance of the body’s largest organ, the skin; promote tissue regeneration reducing scar tissue and stretch marks; pump oxygen and nutrients into tissues and vital organs and so improving blood circulation; relax and reduce knots in overused, tired and stressed muscles; reduce pain and the reliance upon medications;  increase endorphins, the body’s natural painkillers; assists in stretching therefore increasing joint flexibility; improve your mood and reduce depression and also reduce the pain of migraines.

Nichimu Inada grew up in the youngest child of five brothers at Daisenji Temple in Daisen National Park, in Tottori Prefecture Japan. His parents ran a guest house and souvenir shop, which is where Nichimu Inada developed his first interests in business, as well as a desire to be independent. After completing high school, as well as being a successful apprentice in a manufacturing business, at only 21 years of age Nichimu Inada became an independent subcontractor involved in the assembly and manufacturing of massage chairs. President Akamatsu and President Yoshida supported the seriously driven young Inada with a show of devotion as well as financial support as they could see his ambition and admired his work ethic.

Mr. Inada has, throughout the past 55 years, worked tirelessly with the Worlds best engineers and designers to improve the effectiveness and quality of mechanical massage chairs.

Whilst the road to success has often been arduous, Nichimu Inada has taken each challenge as a learning experience and is proud to be the Founder and inventor of Inada Massage Chairs. While his goal has always been to manufacture a compact and aesthetically pleasing chair, his underlying motivation has been to be of benefit to people in a totally altruistic manner. This is why he renamed his Company Family Inada. A name that empowers his believe that his Company is not just about him, but also his employees, comrades and ultimately the end user, the consumer.

The advances in massage chairs throughout the world have been impressive, but in most instances, other manufactures have followed the lead of Inada. Inada developed the first Medical massage chair H.9 I which was selected “2001 Best Invention of the Year” in “TIME” magazine in the U.S. and attracted worldwide attention as a unique and innovative product.

As Nichimu Inada himself has said “Massage chairs are valued for its comfort.  In this stressful society, we need not only alleviation of pain and ache of the body but also comfort in daily life. Feeling comfort amplifies alpha waves and this leads to an increase in the natural healing power of the body. I think that there is nothing but massage chairs to meet these demands. I want to make really effective and comfortable “genuine massage chairs.”

“I think that I have kept this thought, that’s why I have been able to carry on the company’s business for a long time of 50 years.
I am convinced that massage chairs can be useful for human health around the world. This is why I will continue to make massage chairs for people’s smile.”

And that is why Japanese Ingenuity, Elegance & Luxury result in the  World’s Best Massage Chairs. 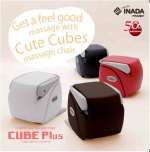